I just came back from the Conference “Thinking, Analysing and Designing Expressive games” (Metz, France) where a bunch of scholars in game studies were trying to define expressive games and to differentiate them from serious games. I heard many interesting talks, including one from Espen Aarseth who was challenging the notion of “procedural rhethoric” developed by Ian Bogost and who was defending the idea that games are not only creating meanings through their mechanics but also through their images and texts. In my talk, I presented the prototype of my game “A Conversation with Hugo” and broke down its creation process to identify the elements that make it an expressive games instead of a serious game, such as its more casual context of play, its vague intention, its shorter dialogues, its procedural expressivity, its less realistic visual design, its minimalistic paratext, and its stronger authorship. I did not present these elements as necessary components of expressive games, but rather as elements that help recognizing this type of game in absence of clues about the creator’s intentions. During my stay in Metz, I also participated to the inauguration of the Game Lab at TCRM-Blida. Here are some pictures of me playing games in the lab! 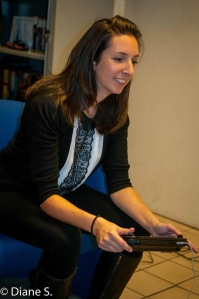