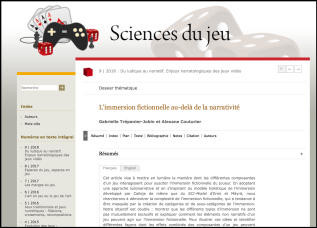 This article is intended to show how game components interact to favor the player’s fictional immersion. With the help of a ludonarrative approach and in light of Calleja’s holistic model of immersion as well as Ermi and Mäyrä’s SCI-Model, we intend to demonstrate the complexity of fictional immersion, which tends to be masked by the creation of categories and subcategories of immersion. Our objective is twofold : showing that the different types of immersion are not mutually exclusive and explaining how non-narrative game elements can influence fictional immersion. To illustrate these ideas and to identify the many ways that combined effects of game components can impact fictional immersion, we will carry out an analysis of the adventure and exploration game Abzû, that is aimed to immerse the player – literally and figuratively – in a colorful underwater world teeming with marine life.

In this chapter, I explore the avenues opened up by video game parodies and see how the comical imitation and transformation of the games’ narratives, sounds, graphics and characters can call gender stereotypes into question. I also try to understand the limitations of parodies as subversive tools and to identify the elements that compromise their disruptive potential. To do so, I conduct qualitative content analyses of the regressive damsel in distress trope in the Super Mario series and of its animated parodies, as well as qualitative content analyses of the avatars’ bodies in World of Warcraft and of their machinima parodies. These analyses show how parodic methods can be used to deconstruct video games’ stereotypes and how machinima can serve as empowering tools. However, it becomes clear that their subversive potential remains under-realized. I therefore argue for the creation of films that mobilize parodic methods in compliance with a feminist agenda and make use of different techniques to clarify their underlying criticism. 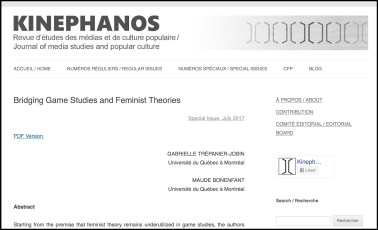 Starting from the premise that feminist theory remains underutilized in game studies, the authors demonstrate that mobilizing concepts from feminist pioneers such as Simone de Beauvoir, Luce Irigaray, Betty Friedan, and Laura Mulvey contributes to a better understanding of how and why gender stereotypes in video games (such as Ms. Male, Smurfette, Damsel in Distress, Natural-Born Happy Homemaker and Sexy Action Heroine) are problematic. They also provide an overview of concepts developed by more recent feminist authors, such as Karen Boyle, Barbara Creed and Martine Delvaux, which highlight the damage caused by constant victimization of women in games, the abjection of their sexuality, and the serial reproduction of stereotypical female bodies. On a more positive note, the authors offer a glimpse of how feminist theories can inspire promising new game characters that undermine patriarchal and heteronormative schemes. 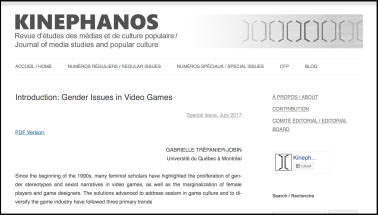 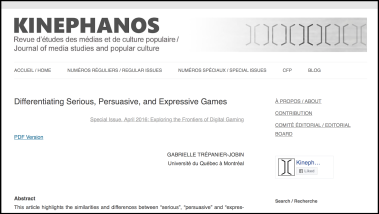 This article highlights the similarities and differences between “serious”, “persuasive” and “expressive” games. Since these categories rely on the developer’s intention and since this intention is not always clearly stated, I identify a series of textual and paratextual clues that might help the players in inferring the developer’s intention. To illustrate the idea that procedurality is not the only factor involved in the labelling of these games, I refer to many examples and conduct a white-box analysis of the game A Conversation With Hugo. I finally stress the importance of not falling into the essentialist trap when labelling these types of games. 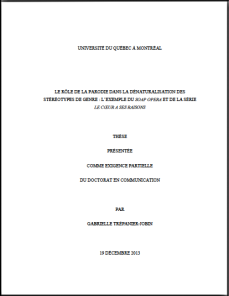 In my PhD Thesis, I work toward understanding the process through which gender stereotypes are naturalized in terms of an interplay between the repetition of certain conventions and the subtle inclusion of differences, drawing from the theories of Judith Butler, David Hume, Jacques Derrida, and Gilles Deleuze. To illustrate this iterative process, I trace back the evolution of the Soap Opera television genre, and show how its recurrent codes and stereotypes have slowly changed over decades, adapting to new socio-historical contexts and preserving the illusion of being ‘natural’ for many viewers. I then explore the possibility that parody can denaturalize gender stereotypes by breaking their fragile balance between repetition and difference. Moreover, I carry out a qualitative content analysis of the Soap Opera parody Le cœur a ses raisons based on the semantic/syntactic/pragmatic approach. I also conduct interviews with 30 viewers to determine if they identify its targets, understand its parodic intention and, ultimately, actualize its denaturalizing potential. Because parodies can sometimes lead to misunderstandings, I finally explore the risks, limitations, and ethical implications of using parodies as subversive tools. 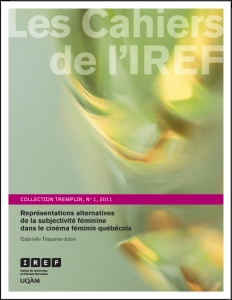 In my book Représentations alternatives de la subjectivité féminine dans le cinéma féminin québécois (winner of the award for the best master thesis in feminist studies), I explore a corpus of feminist theories based on different paradigms, as well as a corpus of films directed by women in Quebec, to find alternative representations of women and to study their subversive potential. I conduct cross-readings of these two corpora and observe how their respective ideas intersect, complement or oppose each other. More precisely, I study the figure of the goddess, the mother-daughter couple, the lesbian, the transsexual, and the borderline, by analyzing movies from Manon Briand, Lea Pool, Paule Baillargeon and Lyne Charlebois, in light of theories elaborated by Luce Irigaray, Monique Wittig, Judith Butler, and Rosi Braidotti. These analyses show how the aforementioned figures respectively make up for the omissions of psychoanalysis and Western religions, reveal the artificiality of sex categorization, highlight the performative aspects of gender, and question traditional metaphysics. 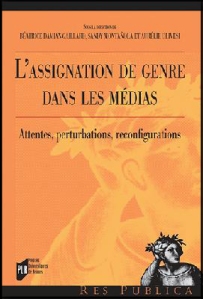 “Enjoyable, from beginning to end” according to on of its reviewers, this chapter traces back the evolution of the Soap Opera television genre since the fifties, to show how its recurrent codes and stereotypes adapted to new socio-historical contexts and therefore preserved the illusion of being ‘natural’ to many viewers. With the help of a semantic/syntactic/pragmatic analysis of the Soap Opera parody Le cœur a ses raisons, I demonstrate how parody can denaturalize gender stereotypes by exaggerating them or transforming them to the extreme.

In this book chapter, I describe how video game players are often constrained to perform gender norms that are associated with the sex of their avatars. I also demonstrate that the performative effect of these ordinary, unconscious and mechanical performances of gender can be counterbalanced by alternative, conscious, and critical performances of gender. To do so, I conduct a qualitative content analysis of World of Warcraft, The Sims Social and Second Life, in addition to carrying out participant-observations in these online environments. 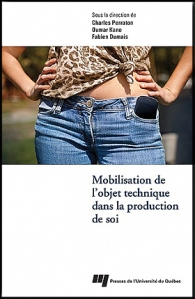 In this book chapter, I conceptualize the relation between the players and their avatars as a co-construction rather than a representation, by drawing from the theories of Zach Waggoner and Judith Butler. I also try to determine how difficult it is for the players to choose an avatar that moves away from gender norms and beauty standards, by studying the software limitations, affordances, and constraints. I finally present machinima parodies as a good means to increase the players’ agency and to challenge video game conventions by turning them into something unexpected. 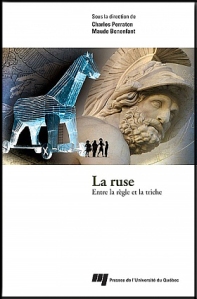 In my chapter “Ruser avec la mécanique des règles”, I posit that social rules tend to be naturalized because of their systemic organization, their normativity, their regularity and their flexibility. To develop this idea, I mobilize the work of the philosophers such as Pierre Bourdieu, David Hume, Gilles Deleuze and Jacques Derrida. Starting from the premise that we cannot free ourselves completely from social norms and rules without suffering the consequences of their transgression (marginalization, discrimination, jail, death, etc.), I assert that the best way to challenge them and to maximize our agency is to play with their iterative mechanics and to take advantage of their weaknesses. These appropriation strategies therefore appear as viable alternatives to the transgression of social rules, which involves more risks of censorship and sanctions. 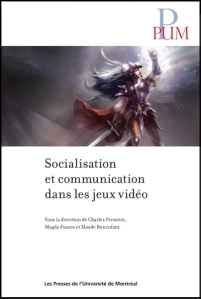 In this chapter, I study the social and ethical implications of cheating in massive multiplayer online role-playing games. Drawing on the moral philosophy of David Hume and Adam Ferguson, as well as on interviews conducted with 40 MMORPG players, I identify the criteria that players use to define cheating, the moral principles on which they base their decisions to cheat (or not), the consequences that players can face when they are caught, as well as the effects of cheating on the gaming community. 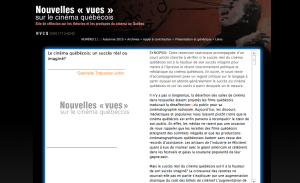 This article is a statistical study that verifies the validity of the claims made about the rising popularity of Québécois cinema. I take a critical look at the words that have been used to describe the success of Québécois cinema and at the variables that were employed to measure it. I also try to address the following questions: Can the revenue growth of Quebec cinema be partly explained by the increase of the cinema ticket prices? Can the rise of Québécois cinema viewership be attributed to a global increase in cinema attendance? Can its market share growth be due to a surge in the number of Québécois movies released every year? Can we really talk about the “success” of Québécois cinema if the attendance growth only concerns one or two movies every year? 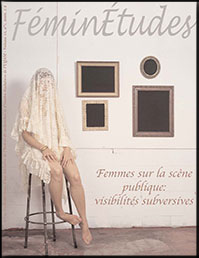 In this article, I study subversive representations of women in film directed by women in Québec. More precisely, I examine how the nomadic subject, theorized by Rosi Braidotti and introduced in the movie “Borderline”, challenges traditional metaphysics. I observe how the goddess and mother-daughter figures, studied by Luce Irigaray and displayed in the movie “La turbulence des fluides”, compensate for the omissions of psychoanalysis and Western religions. I examine how the lesbian figure, analyzed by Monique Wittig and featured in the movie “Lost and Delirious”, puts heteronormativity into question and provide an alternative model of woman sexuality. I finally study how the transsexual figure, theorized by Judith Butler and displayed in the movie “Le sexe des étoiles”, reveals the artificiality of sex categories and exposes the rigidity of social norms.