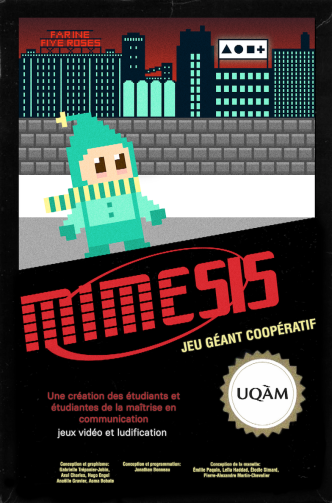 2018. (with  Jonathan Bonneau and a group of master students). Mimesis. Giant Game. Presented at the Festival Montréal Joue during the Nuit Blanche à Montréal and during the event Jeux vidéo de Montréal.

This game encourages groups of players to memorize sequences of shapes, colours and textures, as well as to cooperate and communicate in order to reproduce these sequences on a giant remote control that works with the help of a Kinect motion detector. The story of the game revolves around a typical night at the event Nuit Blanche à Montréal.

2017. (with  Jonathan Bonneau and a group of master students). Moveo. Giant Game. Presented at the Festival Montréal Joue during the Nuit Blanche à Montréal.

This giant game encourages groups of players to play classic video games from the 70′ and the 80′ by controlling together an oversized remote control that works with the help of a Kinect motion detector. The four games that can be played with the device (Super Mario, Frogger, Donkey Kong and Space Invaders) were chosen by a group of master students to illustrate concepts in Game Studies such as immersion, flow, the damsel in distress, as well as the debate between narratology and ludology.

Media consolidation is a board game about the concentration of media conglomerates and its impact of the diversity of media content. It was created for the course SOCI 341 Sociology of the media and can be downloaded here for educational use.

FREE SPEACH – A Second Life Machinima Parody is a 14 minutes-length animated film that mocks gender stereotypes such as the damsel in distress, the sexy combatant, and the macho man from videogames such as Zelda, Super Mario, Tomb Raider, and Grand Theft Auto. The movie revolves around the story of Princess Peach who leaves the Mushroom Kingdom because she is tired of conforming to the passive role that she was programmed for. Borrowing from Judith Butler’s (1990) theory on gender performativity and performance, the movie illustrates the idea that gender and sex categories are socially constructed by everyday life repetitions of femininity and masculinity conventions. Intended to raise awareness on gender stereotypes and to involve the viewers in a collective action, this film is posted on YouTube and linked to an online questionnaire.

A Conversation With Hugo (2015) is a computer game intended to sensitize people to gender-based harassment. Accessible online at http://www.conversation-hugo.com, this game invites the audience to converse with a 8 years old boy who does not want to go to school, in order to understand his problem, gain his trust, and help him. To succeed, players have to adopt an understanding attitude, avoid judgment and refrain from trivializing the situation. The game was presented at the exhibition Jeux Indie de Montréal (SAT) on February 21, 2015, and at the exhibition Gender in Games on June 27, 2015. It will soon be used to conduct a reception study on the potential of serious game for raising awareness on social issues and, perhaps, eventually introduced to high school teachers, college teachers, and social workers.

MixedMatch (2015) is a program code that generates queer video game narratives by randomly combining moral characteristics, physical attributes, and social roles usually associated to either male or female avatars in video games. This digital artwork is intended to show how different video game narratives could be if they were not regulated by arbitrary and socially constructed norms of femininity and masculinity. Accessible online at the address http://www.mixtematch.com, this program code is a personal adaptation of an open-source HTML code created by Nick Montfort (professor at MIT and director of the Trope Tank). 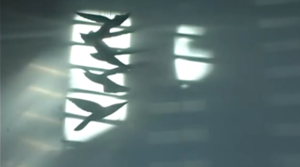