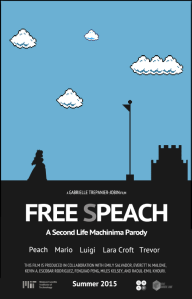 FREE SPEACH – A Second Life Machinima Parody is a 15-minute length animated film, created with the collaboration of MIT Game Lab and a group of MIT undergraduate students, that mocks gender stereotypes such as the damsel in distress, the sexy female combatant, the muscular macho man and the superficial bimbo from video games such as Zelda, Super Mario, Tomb Raider, Grand Theft Auto and Second Life. The movie revolves around the story of Princess Peach who leaves the Mushroom Kingdom because she is tired of conforming to the passive role that she was programmed for. During her quest, she meets other video game characters that help her to change her destiny. Borrowing from Judith Butler’s (1990) theory on gender performativity and performance, the film illustrates the idea that gender and sex categories are socially constructed and can therefore be reworked. The film is intended to raise awareness on gender stereotypes, to conduct a reception study on the critical potential of parodies and to engage the viewers in a collective action. It is now available on YouTube.